The civil unions legislation that was approved by Parliament on Monday has created a sea of emotions for many different reasons. Kurt Sansone reports on what impact the law will have.
Only three years ago Malta was the last-but-one country in the world to introduce divorce.
A one-year heated debate that ended with a majority of people voting for divorce in a referendum had closed the chapter on an issue that was until then widely ignored by the political class.
Last week it went a step further and passed a law permitting civil unions and gay adoption.
The relationship of gay couples will receive formal recognition by the State in a union that will enjoy the same rights and obligations of marriage. Gay marriages contracted abroad will also be recognised by the State.
From having no legislation at all on family rights for gay couples, Malta became the 22nd European country to legally recognise same-sex unions, according to Ilga-Europe, a gay advocacy group.

But the law was controversially much more far-reaching, also including a provision that allows gay couples to adopt children.
According to Ilga, Malta is now one of only 10 European countries from the 49 listed in the Rainbow Map, a score sheet, that allow gay couples to apply for joint child adoption. 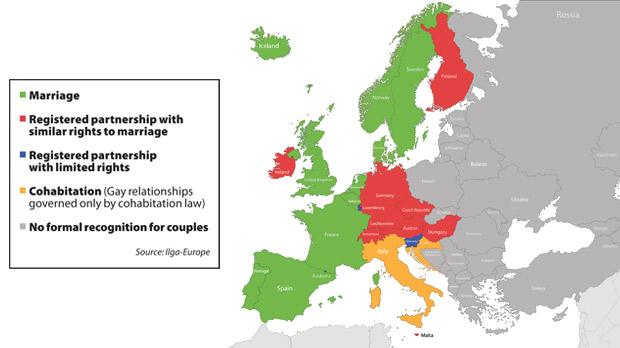 The issue of adoption was the principal bone of contention that led the Opposition to abstain in Parliament. Surveys had shown people were prepared to accept regularising gay partnerships but were opposed to adoption of children by same-sex couples.
And not everyone is comfortable with the development. People such as columnist Lino Spiteri, who had argued against gay adoptions, spoke with a hint of resignation in his voice.
“I am not comfortable but it is now law,” he said. “My opposition was more a question of principle because I don’t think gay adoptions will have a social impact.”
Edwin Vassallo, a former Nationalist MP, had a major concern over the equal footing to marriage afforded to civil unions.
“I am not comfortable with a law that gave us marriage by another name. There was never an electoral promise of the sort and I feel this is dishonest.”
He insisted no studies were conducted to analyse the possible impact of gay adoptions with MPs making an uninformed choice. “We have more impact studies requested by Mepa on development applications than we had on such an important piece of legislation,” he said, asking who will shoulder responsibility for any negative impact this will have on society. In this aspect, Malta was no exception because wherever gay unions were regularised, child adoption was always a hotly contested bone of contention.
Some of the more liberal northern countries that were at the forefront of introducing gay unions had also initially excluded adoption from the acquired rights.
It is this sweeping change that generated considerable media interest abroad, especially in light of the prevailing Catholic influence on the island.
In the scoreboard issued last year by Ilga, Malta was fulfilling 35 per cent of laws and policies the advocacy group would like to see adopted and implemented in Europe.
But this is expected to change next month when the yearly score sheet is updated, according to Paulo Côrte-Real, co-chairman of Ilga-Europe.
“The [parliamentary] vote will significantly improve Malta’s record on our Rainbow Europe Map to be issued this May.”
President Marie-Louise Coleiro Preca signed the law on Wednesday and as the ink on the papers dries the focus now turns to the technical matters that have to be resolved to ensure effective implementation.
Neil Falzon, a human rights lawyer who drafted the law, said that talks have been going on for months between the non-governmental groups, the ministry, the Attorney General and the Civil Registry to iron out practical difficulties.
“The next step is to make the law happen in practice,” he said, rebutting criticism that the law was drafted without taking into consideration its practical ramifications such as how the birth certificate of a child born to a lesbian couple should look.
Civil Liberties Minister Helena Dalli said the civil unions law established the principles and the method and, just like had happened with divorce, a period of time was needed to make the necessary administrative and legal changes to put it into practice.
“The necessary changes to various other laws such as income tax, social security and the civil registry are being discussed at permanent secretary level in a bid to minimise the technical hiccups that may arise,” she said.

Helena Dalli has not ruled out changes to the law on in-vitro fertilisation making it possible for gay couples to have the procedure.
Although non-committal on when this will happen, the Civil Liberties Minister said legislators had to take note of the new reality brought about by the civil unions law and the constitutional amendment on gay discrimination.
According to the law, only heterosexual couples can have IVF. But doubts have been raised on the constitutionality of this law in the wake of Parliament’s approval of a Bill presented by Opposition civil rights spokeswoman Claudette Buttigieg to include a clause in the Constitution that bars discrimination on the basis of sexual orientation and gender identity.

“We have to update our laws to reflect a reality that did not exist when they were originally drafted, otherwise change will be forced on us by the courts if somebody challenges the status quo,” Dr Dalli said.

But Ms Buttigieg adopted a more cautious tone, saying she had to seek legal advice on such “a sensitive” matter.
“What I can say at this stage is that we have to be very careful not to mix up what we believe is the right of an adult, irrespective of gender, and the right of a child,” she said, adding that in such circumstances the child’s right to have a stable family was paramount.
Human rights lawyer Neil Falzon said the discriminatory nature of IVF legislation was only reinforced by the constitutional amendment.
“The specific reference to heterosexual couples in the IVF law is a clear and blatant breach of human rights,” he said.
But there is a second level of discrimination, which he feels is more subtle and indirect. The IVF law outlaws sperm and egg donation and surrogate motherhood, which are the only ways that a gay couple can conceive or have a child.
Dr Falzon argued that irrespective of the civil unions law and the constitutional amendment, the law criminalising sperm and egg donation could be considered an invasion of privacy by the State as it interferes with what a person does with his body.

Lesbian mothers and the law

When a child is born to a married woman, the law automatically assumes the husband is the father.
But what happens when the mother’s spouse is another woman and the two are joined in a civil union?
This question, a result of the civil unions law, was overlooked in the public debate as controversy centred around the ramifications of child adoption by same-sex couples.
But according to Dr Falzon, the non-biological mother in a lesbian union will automatically be recognised as the second parent.
“The same principle as in marriage will also apply to a civil union,” he said, adding the civil unions law made it clear that the rights and obligations listed in the Marriage Act also applied to gay partnerships.
If the child was born before the civil union was contracted, he added, the non-biological mother will automatically be recognised as the parent once the couple join in a civil union.