Malta singled out for progress in LGBT issues

ILGA-Europe has singled out Malta for fast progress in granting equality to trans and intersex people in the latest Rainbow Europe scoreboard.
In a statement, it said that steadfast, committed leadership and visible equality trailblazers are necessary ingredients for advancing LGBTI equality.
“We witnessed several countries making historic strides, while others have stalled in terms of their equality development.” commented Paulo Côrte-Real, Co-Chair of ILGA-Europe’s Executive Board.

“The vital ingredient, present in so many of the countries who have climbed in our Rainbow Map rankings, was unshakable leadership from political figures and activist leaders, often in challenging contexts.”

“Malta’s rise to third in our rating is undoubtedly the most eye-catching story of the 2015 Rainbow Map.” 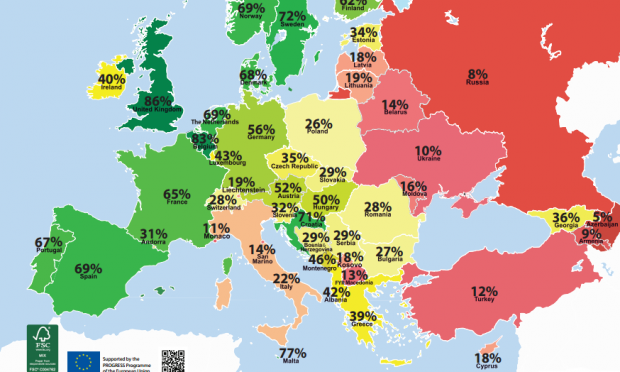 This is an improvement of eight places (11th in 2014) with an overall score of 77% (57% in 2014). These numbers only tell part of the Maltese story – the substantial legislative and constitutional progress over the past 12 months was the platform for this climb into the Map’s top 3.
At the other end of the spectrum, it said, the difficulties faced by LGBTI activists in Azerbaijan were clear; it lies at the bottom of the 2015 Map with only 5%.

The institute said the recognition of the human rights of trans and intersex people came to the fore in a major way in 2014. Great steps forward came in the shape of Denmark’s progressive legal gender recognition law and through impressive standard setting, when Malta gave gender identity constitutional protection from discrimination. The Spanish region of Andalucía adopted similar provisions to the Danish model and The Netherlands removed previous legal gender recognition requirements for a court order, surgery, and permanent sterilisation.
Family and marriage equality rights advanced at pace with future marriage equality approved in Finland, enacted in Malta, England, Wales and Scotland, and to be decided in an Irish referendum in a few days’ time. Estonia became the first former USSR country to officially recognise same sex unions by passing an historic cohabitation act. Progress was not universal though; vocal campaigns for restrictive marriage definitions emerged in Slovakia and the Former Yugoslav Republic of Macedonia.